The main reason for doing this activity, which was organized by the teacher of those two subjects, was because both groups are studying this year one subject of their syllabus in English: the students of first year are attending Computing in English and then the students of second year are learning Companies' Simulation in English too.

Just to remember in what does this game consist of, just let me to explain you that Clue is a popular board game, originally produced by Parker Brothers, that has been a family and friends favorite game for decades. 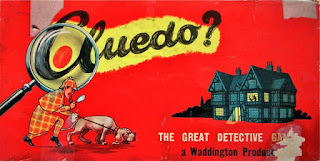 The main object of the game is to solve a murder just asking and answering those questions: Who is each member playing the game? Which relation do you have with the protagonist of the game? What were you doing exactly the time when the main character was killed? With what weapon did you kill him/her? Where did you killed the main character?  As you make suggestions about the murder suspect, weapon, and location, you will eliminate possibilities and get closer to the truth.

So, the steps to following when we played this game were the ones that are now mentioned:
1. Unfold your Clue game board and place it on your playing surface.
2. Place all of the characters, places and where were you when the protagonist was killed.
3. Let students ask question related to him/her identification, his/her relationship between the person who ere killed, his/her location when the crime took place, his/her possible weapon..between among others questions that you can feel comfortable doing as to try to guess who was the murderer.
4.Reveal the name of the murderer.

After one hour playing the game, students started to feel more confident and comfortable when explaining the subject, which was the main purpose of this game due to the fact that they need to speak, ask and answer doubts and questions in English during all the year in those two subjects.

All the students liked a lot and, of course, they had a different but wonderful beginning of the academic year.